Airsoft skirmishing, often referred to as simply ‘airsoft’, is a live combat simulation in which two or more teams are pitched against each other in a game of fitness, skill, determination, tactics, psychology and wits. Players battle with each other with replica firearms which fire small, light plastic pellets at high speed (usually firing around 15 BBs per second and up to 350 feet per second muzzle velocity).

The realistic playing area, mission, equipment and clothing all add to the intensity and suspension of disbelief; in an airsoft game you can get a genuine sense of a real battlefield. If you have ever wanted to play out the excitement of a war movie or computer game for real then this is your chance! Airsoft is excellent fun but it also builds confidence, fitness, teamwork, introduces you to new friends and most importantly gets you out of the house. 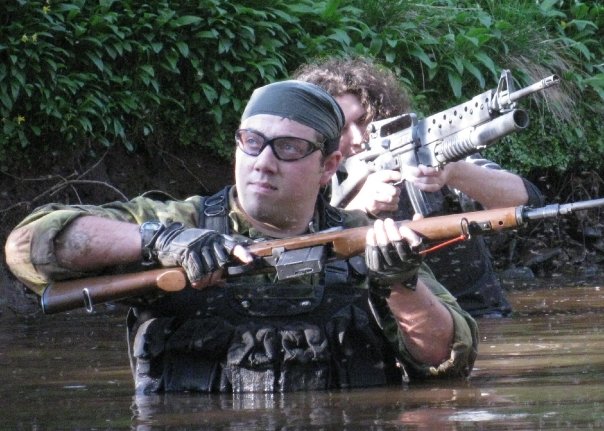 Airsoft is the perfect answer for the modern British lifestyle; it allows you the rare opportunity to release pent up energy, escape the pressures of everyday life for a few hours and gain a sense of community. These positive ideals of discipline, physical exercise and team spirit far outweigh any concerns over simulating real firearms.

This guide has been written by the players that run United Kingdom Airsoft Players Union, so all of the information in this guide has been gleaned from decades of first hand experience. It has been written to help new British players get involved in the airsoft hobby. The survival of any sport or pastime is dependent on the continual induction of new enthusiasts. Most players know this and are more than happy to welcome and advise beginners. The British airsoft scene is bigger than it has ever been, but with anti-gun sentiment in the media, convoluted laws and a public which is wary of anything firearm related, new players can find it is difficult to get into the hobby.

Much information in this guide will be of use to new players from outside the UK, but please bear in mind that the emphasis is on helping people get into the British skirmish scene.